KA-POW! …the sound of a well-timed theatrical punch from Adam West (against a nondescript masked henchman) or the sound of the Republican tax plan’s well-timed punch against the market bears?

With all of the adjectives being thrown around with the yet-to-be-revealed tax reform plan, we wanted to cut through a little of the “massive” and “phenomenal” noise and provide a quick overview of what’s at stake, what a tax plan may look like, and why the market cares.  First off, the rabbit hole runs deep when competing political interests are involved, and it gets even deeper when we start talking about the tax code.  We’ll try to keep the information here digestible and interesting.

Tax reform was a central pillar of Mr. Trump’s campaign, and his plan — on campaign paper at least — involved “four simple goals”: 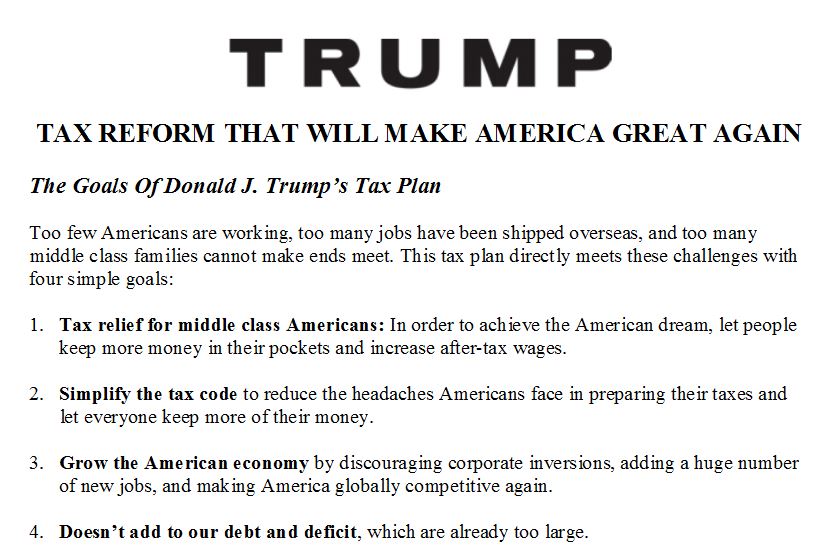 A failure of any plan that doesn’t achieve the aforementioned goals creates some uncertainty about Mr. Trump’s reelection potential (his administration’s initial missteps notwithstanding).  Also, incentivizing companies to keep supply chains and production domestic (in an effort to avoid paying a stiff tax on imported goods) is part of Mr. Trump’s plan to bring back jobs that were previously off-shored.  That’s somewhat captured in goal 3 of Mr. Trump’s tax plan, but the devil’s in the details — in order to “pay” for a reduced corporate tax (which would further encourage U.S.-based manufacturing and job creation), a Border Adjustment Tax (BAT) would help offset the reduction in collected taxes from corporations.

The GOP has been working to provide an executable plan for tax reform that’s headlined The Tax Reform Task Force Blueprint. We could’ve thought up a better title, but that’s what the GOP went with.  In a nutshell, the plan attempts to reform various elements of the U.S. tax code and introduce border adjustments in order to reshape the economic environment into a pro-growth setting.  That’s the idea, at least.  At its core, the plan tries to move away from a tax system based on income and towards a system based on a consumption.

Quite simply, an adjustment tax introduces a tax on imports into the country.  Things made in America that are then sold overseas are exempted from the tax.  In a simple scenario, if two countries are trading together and both have a border adjustment tax (most of our trading partners have a Value Added Tax that does this), the effects are academically neutral.  Since the U.S. doesn’t have a border adjustment tax in place, exports bear an “implicit” income tax and imports bear no income tax at all.  The GOP’s plan calls this a “self-imposed unilateral penalty on U.S. exports and a self-imposed unilateral subsidy for U.S. imports.“

So a very basic tax plan (let’s use the one that Paul Ryan is pushing) would involve:

Republicans are betting on using a process called reconciliation to get any plan through the Senate without running into lengthy delays or filibusters.  The Byrd Rule stipulates that reconciliation can’t be used if a provision “increase[s] the deficit for a fiscal year beyond those covered by the reconciliation measure” …which is a pretty big hurdle for a tax overhaul that has a lot of moving parts, unknowns, and emphasizes lower taxes (which one would assume would increase the deficit).

So a system called dynamic scoring is being used to try to capture the economic effects (like increased consumer spending) of the proposed tax plan.  The idea is to try to ascertain the changes in behavior that would result from tax policy incentives, thereby — potentially — demonstrating that the tax plan would not increase the deficit.

Why the market cares:

In all honesty, there are so many forces at work that any model would be woefully inaccurate.  But we have to start somewhere… so let’s pick the U.S. Dollar (USD) in the context of some sort of border adjustment.  And let’s keep it simple.

In the short term, the USD should follow capital flows.  So if a BAT has the effect of making “Made in America” stuff cheaper overseas, that’s a benefit for our trade balance and should result into capital flows into America.  So the USD rises relative to other currencies (since the USD “floats”).  This is good news for retailers and other firms who rely heavily on imports.  A stronger USD essentially offsets the border tax on the stuff that these companies are bringing in to sell in America or use in finished products (like car manufacturers who import parts from Canada/Mexico).

But wait… a stronger USD means our stuff is more expensive overseas, right?

So in a vacuum we’re left with a zero-sum expectation.  The stronger USD pays for the border tax for importers, and exporters see the cost of their goods appreciate in foreign currency terms (since the USD is stronger).  Furthermore, we’re left scratching our heads as to how this spurs domestic job creation if demand for exports is muted by a strong USD.

There are a lot of assumptions here; namely, that exchange rates adjust quickly and efficiently to new information.  If they don’t, bad things probably happen.  Imports become expensive, U.S. consumers can’t buy as much, dogs and cats live together, etc.  Perhaps that’s a little hyperbole, but currency overshoots do present a risk to an adjustment tax.

In the over-simplified long run, the USD should track real rate differentials; that is, the difference in expected interest received after inflation as expressed between foreign exchange rates.  So now inflation becomes part of the equation (as are productivity and employment expectations, among other things), which is well beyond the scope of this post.

It’s important to note that the BAT is just one component of the tax plan.  But hopefully you can see why the market cares… and why it’s still anyone’s guess as to what the tax plan will look like and what the immediate and long run effects will be.  And what about the part of the GOP tax plan that doesn’t allow for expensing of net interest costs?  …another piece of the puzzle to contemplate, especially when looking at the high yield space.

Mention of products, providers, or services does not constitute an endorsement or relationship.

The information presented here is for informational purposes only, and this document is not to be construed as an offer to sell, or the solicitation of an offer to buy, securities. Some investments are not suitable for all investors, and there can be no assurance that any investment strategy will be successful. The hyperlinks included in this message provide direct access to other Internet resources, including Web sites. While we believe this information to be from reliable sources, Targeted Wealth Solutions LLC is not responsible for the accuracy or content of information contained in these sites. Although we make every effort to ensure these links are accurate, up to date and relevant, we cannot take responsibility for pages maintained by external providers. The views expressed by these external providers on their own Web pages or on external sites they link to are not necessarily those of Targeted Wealth Solutions LLC.